Aspergers Boyfriend Has a Computer Addiction? 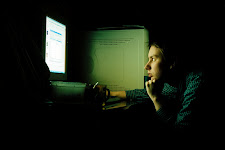 “What can I do about my Aspergers boyfriend’s tendency to spend countless hours on the computer (researching this and that)? I don't usually care for labels, but I think it would be fair to call him a "computer addict." He is in his “home office” constantly and spends very little time with me or my son. Our relationship ALWAYS comes second. When I approach him about it, he just says, "I’ll be done in a bit… hold on!”  Do you have any ideas that can help us? We have talked about getting married someday, but we’re just not there yet. I really do love this man, but I have to wonder if he values being on the computer more than he does me.”


The first thing to do is to make an effort to get inside your boyfriend's mind. If you can understand his motivation and what makes him tick, you'll be in a better position to help him fully comprehend your concern. As you may already know, people with Aspergers are “wired” differently. One of the traits associated with the disorder is the fact that they give a lot of time and attention to just one or two “special interests.”

Give this a try: Plan a nice dinner out with your boyfriend on the weekend (without your son, if possible). Put aside your anger and disappointment and tell him how much you love him and appreciate him as a partner and a role model for your son. At the same time, be honest with him and let him know that his “computer time” seems to be taking precedence over the relationship. Tell him you value his input and involvement as a father-figure, and ask him if he would be willing to examine his schedule and make some changes.

If you can deliver this message in the spirit of love rather than resentment and frustration, you may be surprised at how positively your boyfriend responds. On the other hand, if he reacts defensively and denies there's a problem, it may be time for the two of you to consider couple’s counseling with someone who specializes in ASD. If he refuses to go to counseling, then you may need to either (a) learn to live with this situation, or (b) consider moving on.

If your boyfriend does express an openness to your concerns, then you've taken a huge step in the right direction. But you will want to have plenty of patience in store. If he truly has a computer addiction, he's not going to change overnight. If he's serious about making the changes you're requesting, he'll want to be held accountable by a therapist who specializes in addiction.