Tips for Discouraged Neurotypical Spouses: Are You Really Married or Simply Cohabitating? 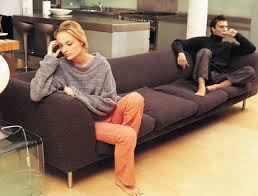 In a true marriage, there exists an "us" or a "we" factor. In other words, your spouse:

(a) is your spiritual partner or soulmate,

(b) is mostly on the same page with you on the issues of values, beliefs, parenting, etc.,

(c) is in tune with how you feel (e.g., knows when something is bothering you and inquiries about it),

(d) shares some of the same friends that you do,

(e) is a helpmate (e.g., helps around the house and/or helps pay bills, provides reassurance and comfort in your times of need, etc.).

This is in no way an exhaustive list; many other factors are equally as important.

Unfortunately, in working with couples where one spouse is affected by an autism spectrum disorder (i.e., Asperger's or high-functioning autism), I have learned that some NT (i.e, non-autistic) spouses who are considering a divorce feel that they have never had a marriage that was anything more than two people living together and meeting their individual needs.

Many of these couples have shared a home and raised kids, but they participated in those activities from an independent rather than united position (e.g., they are in close proximity to one another since they live in the same house, but are emotionally distant).

One NT partner stated that she had a difficult time admitting that her marriage of 18 years was in fact in name only, even though they had raised a child and lived under the label of wife and husband. Their son, who went off to college at age 19, seemed to be the only factor that held the relationship together. When their son “flew the coop,” a huge void became evident.

This resulted in the two of them threatening to divorce every few weeks, and they seemed to have a daily ritual of arguing. This pattern remained despite the fact that they had attended numerous “couple’s therapy” sessions. Eventually, the wife was able to admit to herself that she was neither married nor single. She stated, “I felt like I was nowhere.” This was the point at which she started the real divorce process.

If you are contemplating separation or divorce, you would do well to ask yourself the following questions:

After answering the questions above, if you still believe that you are in a marriage that has no genuine "us" factor, then this may be a good time to either commit to learning how to do that, or admit that you never really had a marriage – and move on. Life is simply too short to just “go through the motions” of having a mutually loving, caring relationship.

I am wondering why I continue to research solutions when my partner is not open to actually resolving anything. Our situation is complex as I am sure all of your clients situations must be. I am tired and definitely resentful to the point where I am contemplating leaving but consider the children and the the finances as being the main reasons to continue to endure. At this point you probably can guess that I am the neurotypical female, also highly empathetic, with an undiagnosed aspergers partner. Except that he is not really a partner even after 4.5 years. We have a 2 yr old daughter and two children from prior relationships who are both 8.5 yrs old. We are in a domestic partnership and have been engaged for four years. I have not married him because of many emotional, physical, and social problems. We are a specially blended family with the added complication of a diagnosed aspergers, ocd, and gad son. His son is a huge issue because the dynamics of co- parenting have never reached a compromised equilibrium.

This is a huge disconnect with the children and my partner has been physically abusive to me, yet he refuses to admit he has a problem and even blames me for his sons meltdowns, which often trigger verbal or physical abuse towards me. I am an educated person in a cycle of domestic abuse. Any communication that occurs between us results in his stonewalling, verbal abuse, and circular gaslighting blame. His projection issues have taken a toll on my mental well being, soul, and ability to be the mother I want to be. I guess I just really needed to write this out because I know that the time we have left is calculated and will result in an eventual division. I often wonder if maybe he is actually a narcissist and does not have aspergers at all. However, I have done extensive research which has helped me understand the children that I teach as an educator, but his inability to accept his own deficits, and my attempts at communicating them have resulted in additional mental anguish and trauma for me and the children.

I suppose what I have read in your book has really been a review of the various years of research that I have done alone. And I have come to the frightening conclusion (Johann Wolfgang von goethe) that I cannot mend the relationship for both people because he is unwilling to accept any responsibility and blames or insults me when I try to communicate. I believe the verbal abuse hurts the most because it has become part of my internal dialogue and it is invisible, much like the plague of social complications that people with aspergers deal with each day. I am mentally exhausted and I suppose I know that there is no hope for our relationship because I value it as a priority, while he uses me as a crutch for life.

Overall I do believe he is very controlling and micromanaging in an obsessive manner and he projects this issue onto me. He is a passive parent and only thinks of his son with aspergers, refusing to look at the well being of the entire family. Yet I am blamed for his meltdowns and his sons. No matter how passive I am or how much I "shut my mouth" No credit is received for any attempt at adopting his laissez-faire parenting style. So I retreat and try very hard to maintain some sort of normalcy in a world crumbling into the hell that we call a home.

Your ebook would have been far more helpful to our relationship 3 years ago, but hindsight is of course 20/20. I guess I gathered the research and facts and accepted them for some time, but I suppose if a man has self-medicating issues and refuses to seek true help, there is no solution only heartache. Your book was a review, and for that I am thankful because I have seen this through to "inevitable catastrophe" Andrew Boyd...

I do want you to know that in my experience aspergers men who are single children have an inflated sense of entitlement and extreme insecurity. His rigid logic also employs chauvinism and belittling of women, including female children. He often confuses and projects his past marriage issues onto me. Yet he will pretend to be all for equality between genders publicly, while imposing  double standards and oppressive behavior privately. I believe this was learned environmentally from his doting and overly involved parents. I would love for him to employ your strategies and even sent him a copy of the ebook, but he only reads science fiction and scans every other piece of text in brevity to appease my nagging desperation.

Thank you for the review. I am sure I will reread it as needed in the future as he will always be in my life because we have a young daughter together. I hope he will read your book and seek help to understand his condition and to become a better father in the future.