Signs That Your Neurotypical Wife Is Becoming Bitter: Tips For Husbands on the Spectrum 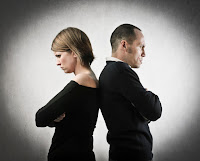 If you are a husband with ASD (high functioning autism) who is married to a neurotypical (i.e., non-autistic) wife, you know that marriage is not always a walk in the park.
When the honeymoon phase disappears, and your wife starts to get frustrated with some of the symptoms you have that are associated with the disorder, there are bound to be disagreements.

But, when disputes and friction start to overshadow the positive aspects of the marriage, there is a bigger problem looming: BITTERNESS.

How can you differentiate between (a) day-to-day, normal instances of irritation and (b) signs that your wife is becoming bitter?


Bitterness builds up over time. Similar to rust, it silently eats away at the marriage. Once bitterness enters the picture, a fair amount of damage has already been done. Due to the damaging effects bitterness can have on the marriage, it’s important to recognize the signs that your wife is becoming bitter.

There are so many Asperger’s traits that can become sources of bitterness (e.g., perceived lack of intimacy, lack of empathy, problems with equal distribution of chores, lack of desire for sex, issues with friends or other family members, differences in social preferences, etc.) that it can be nearly impossible to go back and “fix” the problem(s) once bitterness has taken root. In any event, it's up to you and your wife to pinpoint the source and work on it together through open, honest communication.

Here are some signs that your neurotypical wife is feeling bitter about something:

1. An Increase in Heated Arguments— It's one thing to have day-to-day disagreements that naturally crop up in a marriage. But, when arguments become more frequent and intense, you should take time to evaluate whether something deeper is at play. If the arguments are now becoming a way for both parties to seek revenge, and things are said that are doing real damage, then the problems are clearly worsening – and even more bitterness is likely bubbling over. “Mean-spirited” arguments are a sign that the two of you are no longer engaging in communication, but have built up walls to shut the other person out.

2. Depression— All marriages have moments of sadness (e.g., dealing with job loss or the death of a loved one). But, full-blown depression is a different animal, and can mean any number of things. If your wife is feeling depressed as a direct result of her bitterness — and the hurts have piled up over time — that is a sure sign that you on well on your way to a divorce (unless you become proactive).

3. More Time Spent Apart— Withdrawal is a natural response to feeling bitter. If your wife is spending more and more time away from home, or is now sleeping in the other bedroom, then you can rest assure that bitterness is taking root.

4. No Affection— If you and your wife used to show affection, but you notice that the hugs and kisses are scarce nowadays, this is a “red flag.” It is a sure sign that the level of bitterness has escalated to the point where one or both of you has simply left the relationship in an emotion sense (even though the two of you may still be living in the same house).

5. No Anniversary Celebration— Spouses are supposed to support one another, so it can be a big slap in the face if the two of you don't show enthusiasm about celebrating your wedding anniversary anymore. It‘s extremely heartbreaking when one of the spouses “forgets” the anniversary – or even worse, when he or she consciously knows it's the anniversary, but purposely will not celebrate it. Events that were once important to both of you – but are now met with a lack of enthusiasm – it is a sign of bitterness and resentment.

6. No Hope— Your wife may have temporarily felt helpless back in the day, yet believed that there was a way to salvage things. However, now she has moved from helplessness to hopelessness. Hopelessness has much more of a feeling of gloom, because the wife becomes convinced that things will NEVER ever get better. If the two of you can't look ahead to the future with a sense of excitement for what's to come, it's a sign that there is some major bitterness revealing itself.

7. No Sex— Withholding sex can be a form of revenge for a series of perceived slights. Refusing to be intimate as a result of bitterness widens the gap between each of you and is a sure sign that the end may be in sight (unless there is an intervention of some kind).

If you've noticed any of these indicators in your marriage, then seeking professional help is greatly needed. The deeper the bitterness – and the longer your wife has experienced it – the less likely counseling will “save” the marriage. Seek the assistance of a professional counselor who is experienced and trained to help couples affected by autism spectrum disorders. The sooner you get assistance, the sooner you can limit further damage and begin to see what can be salvaged.

•    Of course not one Aspie has read and commented. Too self absorbed too notice. I'm there. Bitter and done. Hatching an escape plan.
•    I'm with you. I want to get in shape and start putting money in my own savings account. I should have dated him longer so I could see that being with him is like being alone.
•    This is so accurate. I loathe my husband most days. He was so perfect in the beginning, and now he just plays his pouting games. I went back to school before I figured out that he has ASD, so I am currently dependent on him. Not sure what to do. I feel so stuck and I know his brain will never work the way I want it to.
•    I have Aspergers and have an I have an NT girlfriend. I have recently learned it's important to work together as a team instead making her feel like she has to spend more energy not only taking care of her self but me as well. Due to my struggles she often did more work on house and solving problems but now I want to make sure every day that's she's not doing all the work. I'm allowing my relation and the love I have for her be an inspiration to work on the things I struggle at such as paying attention when j do things to minimize accidents, or give more effort try to figure out things myself before asking for help but also make sure I do it right and if I can't, ask for help instead of breaking something. I'm trying to listen more even when I have stuff on my kind, I learned that it's okay to put your thoughts at a later time. I try to do fun things together like watch programs we like together. I didnt realise I was not always doing that until I read some forums where I heard other NT partners express concern . If takes effort sometimes but i know a good relationship is 50/50 and now keeping that as a moto, I always knew that but now I understand that on a deeper level and my love to her and seeing her happy is worth the effort I improving on these areas that I sometimes lag on.
•    Bitterness leads to illnesses. You may think you’ve become accepting to this short changed way of existing, but your body reacts when u r emotionally drained.