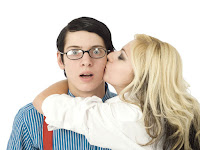 "My new boyfriend advised me he has autism (high functioning), which I have no problem with that (other than I don’t really know a lot about the ‘disorder’). I’m very interested in him …he’s a really nice guy, but I have one issue that puzzles me. He seems to pull back a bit when I make physical contact with him (lean against him, put my arm around him, for example). He says that sometimes it’s hard for him to be touched by others and stated that he never liked to be hugged by anyone as a child. This concerns me, because how can you have a close relationship with someone who is uncomfortable with physical touch… would be really hard to have a man that you can't hug, kiss or hold. Is it common for ASD?"


Although it can happen, it is rare for adults with ASD (and Asperger's) to "refuse" to be touched at all times - in all situations. However, it is fairly common for them to have tactile sensory issues, which may make them avoid certain types of physical contact with others on occasion.
BUT... this really has nothing at all to do with the inability - or lack of desire - to show or receive affection. I work with many adults on the spectrum, and they are the most kind and compassionate people I know! So please don't make the mistake of taking your boyfriend's lack of interest in physical contact as a personal insult.

One of the most pervasive myths that surrounds ASD is that a person who has it will never show affection and can’t accept receiving affection from others. ASD and the way it affects people really runs the gamut from mild to severe. An excellent point to remember when dealing with a person on the autism spectrum is that each one of them is different and will react to almost everything differently.

For a few adults on the spectrum, a simple, random hug can be sensory overload. They can become agitated if they are touched without prior warning. You will probably need to have a trial-and-error approach when it comes to hugging and touching your boyfriend. Some methods may be responded to in a positive way, other ways might not be. You just have to try and see.

When you want to give your boyfriend a hug, instead of rushing into his personal space and just taking one, approach him and open your arms. Smile and see how he responds. If he doesn't come leaning in for a hug, don’t feel snubbed. It just wasn’t the right time.

Let’s don’t sugar-coat things here, though. You need to know that trying to figure out a puzzling disorder like ASD can be a lifelong challenge, and for many partners and spouses, the affection issue may be the biggest. But with patience and learning to go by your boyfriend’s cues and not your own, you will be able to connect with him in a deep and satisfying way.
View the comments below for additional perspectives on this matter.

==> More information on dealing with boyfriends on the autism spectrum can be found here...