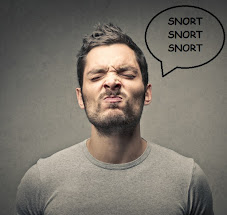 “My husband [high functioning autistic] makes this kind of snorting noise all evening (I don’t really know how to describe it) which is so annoying and distracting. He does this while were watching TV, in the car, and it’s embarrassing to me when we have company over. No amount of pointing this out to him while he’s doing it gets him to stop (for very long anyway). He will make softer snorts for a few moments, but then starts snorting loudly again – and doesn’t even know he’s doing it until I tell him so. It seems to happen unconsciously. Is this part of his ASD? Is it a separate issue? Am I making too much of this? Is there anything I can do to help him? Sorry for all the questions, but I need some solutions – please! It’s driving me nuts!!! It’s got to the point now where I have to go into the other room if I want to watch a movie or read a book. Otherwise, there’s no point in trying to focus on anything.”

ASD can have many symptoms, such as tics. Tics are rapid, sudden movements of muscles in the body. Tics can be vocal as well. Vocal Tic Disorder (VTD) is characterized by sudden, rapid, recurrent vocal sounds (e.g., constant clearing of the throat, humming, grunting, saying curse words, sniffing, snorting, squealing, etc.). If a person has both motor and vocal tics, he is diagnosed with Tourette’s. If he has only vocal tics, he is diagnosed with VTD.

Vocal tics can be moderately controlled, usually for a short period of time during which the person makes a major effort to control them. However, the vocal tic usually reoccurs – and may be even stronger due to the compensation attempt. Vocal tics often worsen as a result of stress, anxiety, or fatigue. They may also worsen due to positive feelings (e.g., excitement or anticipation). Whenever the person focuses his attention on something else (e.g., surfing the Internet), the tics often decrease due to distraction and relaxation.

There are a variety of medications that are prescribed to help control the symptoms of VTD. However, the best-known treatment is a form of cognitive behavioral therapy (CBT) called “habit reversal training.” If a person gets “the urge” before the oncoming vocal tic, he is taught to recognize it and identify the circumstances that trigger it. The person with ASD and the therapist develop a “competing response” (i.e., an action the person performs when he feels the urge that is incompatible with the vocal tic and less noticeable to others).

One of my male clients with ASD level 1 had a tic that involved sniffling his nose. So, I had him perform a breathing exercise as the “tic substitute.” In this way, he was actually still doing a tic, but in a less socially unacceptable way. This method – in combination with teaching him some relaxation techniques – decreased the frequency of the vocal tics significantly. One of my other clients was able to suppress a vocal tic by chewing gum (because it was “hard to chew and tic at the same time”).

Making those vocal sounds is comforting to your husband in some way (though I can see why it would be irritating to you). Aside from learning to ignore it or simply going into the other room, I suggest that you call your physician and see if she/he has an idea. Generally, a distraction of some kind will help (e.g., massaging his shoulders), but this will likely just be a temporary fix. So, you really do need some outside assistance – especially if this problem is affecting your marriage.

By the way, you’re not the only one dealing with this issue. I have had similar complaints from many “neurotypical” wives over the years. It’s just one of those quirky things that comes with the ASD package.

•    Anonymous said… Adjustment and acceptance in any relationship can be challenging and a daily effort. Sensory behaviors that are done to maintain (mental) arousal or to calm are not always conscious. I don't think women feel that their spouses are freaks, but idiosycrasies can be hard to live with, especially when your emotional/intimacy needs are not being met by the relationship over time. You can't solve the "problem" and that can be maddening. Scab picking, nose picking, nail biting, verbal tics, throat clearing, snorting, coughing, constant debating, excessive talking, not talking, etc., etc. are functions which draw attention and are also hard to overlook in social situations. Frustration comes, but it doesn't mean that there isn't deep love between those two people. If you didn't love that person, you wouldn't stay. The site is an excellent resource. I hope you find this to be true in your situation.
•    Anonymous said… Asperger folks are highly sensitive to sights, sounds, smells, light. They often have repetitive behaviors that some may find unusual or even offensive.....it goes with the territory. But for me, all the good traits make up for the ones you don't like. Of course, I'm biased because I live with one I love dearly.
•    Anonymous said… Film it on your I device and show it to him.
•    Anonymous said… Its anxiety. You get trapped into a stim behavior. Almost impossible to stop until you break the cycle. Possible medication?
•    Anonymous said… Maybe he's just allergic to the family pet or your new perfume.
•    Anonymous said… Question?.is this apart of touretts syndrome. I have a family member (teenager) that has Adhd. He was also diagnosed with a mild form of touretts. When he was younger he constantly blinked his eyes. On meds now. Under control.
•    Anonymous said… Some of the questions you get make me wonder how long these couples knew each other before getting married. Like the question yesterday about how the girlfriend was just diagnosed, and it's putting a strain on their relationship. Hi, let's explain something, just because you now have a word for how she is different, doesn't suddenly mean she is acting any different than she did before the diagnosis. And for this one.... No, there is no way to make that noise stop, it's an unconscious stimming mechanism. One that you had to have known about before marriage, unless you never spent any real time together before now.
•    Anonymous said… Sometimes my sinuses are so sensory distracting I can't help but snort. Gross, I know, but blowing your nose only goes so far