Why Adults with ASD May Seem Inflexible 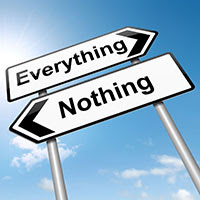 Would you, as a neurotypical woman, say that your ASD partner or spouse (a) thinks in terms of extremes (i.e., all or nothing, black or white), (b) reacts emotionally when things don't go right, (c) over-monitors his decisions as right or wrong, good or bad, (d) looks for too much certainty in a world full of uncertainty, or (e) judges himself as strong or weak, bright or stupid?

If so, then your man may be experiencing a “false dilemma." In other words, he believes he's stuck in a dreadful situation, when in reality he's not.
When a person falls victim to a false dilemma, he has incorrectly condensed an entire spectrum of possibilities down to the two most extreme options, each the exact opposite of the other - without any shades of grey in between. Oftentimes, those options are of the person's own creation, and he is trying to force the world to conform to his preconceptions about what it should look like.

A false dilemma means viewing the world only in terms of extremes. If things aren't " great," then they must be "atrocious." If the ASD man isn't "exceptional," then he thinks he must be "dumb." In real-life, situations are usually shades of gray – not black or white. Falling victim to a false dilemma tends to worsen anxiety, depression, OCD, and a host of other issues.

Under intense pressure, the man on the autism spectrum may retreat to a primitive way of thinking (i.e., a backsliding from age-appropriate thinking to a more immature way). He is most prone to regressing when he is having a hard time and feels besieged by his own negative emotions. For that one moment, when he starts relying on the words "never"  or "always," or views the world in black and white terms, he is slipping back to the way he viewed the world as a child.

When we only see things in black and white, we miss out on alternative ways of understanding the world. These alternative ways may be just as good - if not better - than our current way. A false dilemma often creates a false choice between “A” and “B,” when “C” is the more precise and helpful perspective. Sadly, if we only think in black and white terms, then we're not likely to even consider “C” as an option in the first place.


A false dilemma often creates “artificial needs” in the person's life that lead to discontent and despair. This is his tendency to think that life “must” be a certain way – otherwise it will be intolerable. The false dilemma doesn’t open the person up to the possibility that, even if life doesn’t work out exactly the way he thinks it should, he can still be content. A false dilemma makes the individual less adaptive to his surroundings, which hinders his social development. It’s also what keeps him stuck in old habits and thought patterns.

A false dilemma doesn’t just hurt the man on the spectrum, but also the relationship he tries to build with his significant other. When he sees the world in strict and over-simplistic terms, he is less likely to negotiate or cooperate with his partner or spouse to meet common interests.
This is because he doesn’t see the grey areas in life (which is a mind-blindness issue that most people on the autism spectrum experience). He believes everything needs to be a specific way, and he is not willing to depart from this limited view of the world. This can make him inflexible - and annoying to live with.

Some adults on the spectrum simply do not have the vocabulary to describe the grey area. For example, the "autistic" either considers his coworker to be a friend or not. The concept of different levels of friendship - and the gradual building of trust - may be unknown.

Perhaps worst of all for people on the spectrum is the fastidiousness that precedes a false dilemma – and the self-condemnation that follows. Some men on the spectrum think they should be doing everything “perfectly,” because if it’s not perfect, it’s certainly flawed in a major way.
As such, the false dilemma may underlie some of the stubbornness that neurotypical spouses/partners often see in these men. So, learning - which involves not knowing things, but gradually learning them while making mistakes along the way - can be an excruciating process. For example, starting a house repair (e.g., putting down new flooring in the kitchen) can be overwhelming to the point of paralysis.