Wife's Account of the Ups-and-Downs of a Neurodiverese Marriage 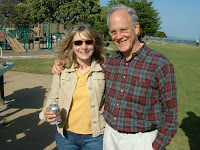 I'm a 'neurotypical' (as they say) wife of a man, David, with ASD [level 1]. We've been together for over 18 years. And I've learned a lot about him in that time period. Fortunately, we knew he had the disorder from the start. So, there were no shocking surprises along the way (although there was a steep learning curve for me). I think that for those who have already been diagnosed, they have a better chance at making the relationship work.

Life is like a complex puzzle for David. With time however, I was able to see why his behavior (that often seems inappropriate to me) is the only right way for him to react.

Once we got married, the true traits of his disorder become more noticeable. His constant need to be reminded of things and the way he lost track of time was cute when we were dating, but not so much now. Sometimes I still get angry as I wonder why - after so many years of being together - he still can't understand what I am saying or understand my feelings.

At times David appears egotistical, selfish, and uncaring, but I've learned that this is not truly the case. He has a 'neurological' condition in which he is often unable to understand the emotions of others. He just has difficulty interpreting other people's feelings adequately or figuring out the sarcasm in their speech. And sometimes he is surprised and a bit embarrassed when he finds out his actions were perceived as rude and hurtful.

While it was nice to have David's unwavering attention when we were dating, a married couple needs the socialization of others. I am often surprised how unsociable he can be. But I understand he is not intentionally trying to frustrate me. And he is not trying to ignore me when he gets so wrapped up in his hobbies.

David has certain rituals and routines. He hates surprises and not being able to handle changes. He has a hard time remembering 'the little things', and is easily distracted. All of these traits, though, are not meant to hurt anyone.

Accepting the differences that come with the disorder is crucial. No relationship is perfect, and neither is one with an Asperger's husband. Having a better understanding of Asperger's has been the 'saving point' in our marriage. I'd like to say thanks to Mark Hutten for his book on Living with an Aspergers Partner - as well as his online therapy groups. Things would have been much more difficult without his advice.

Together, couples can work out a better understanding of one another and learn how to better communicate and to send clearer messages to each other. For a successful relationship, knowing that their spouse with Asperger's really does care (just shows it differently) makes all the difference.

David is a very reliable and responsible person. He works hard and is a good provider for our family. He doesn't try to meet the obligations society has for men in general. For example, he is quite happy to help clean and cook. Most of the time when asked, he is more than willing to help out with whatever task is needed …all I have to do is ask.

Love you David. For now and forever!