Why Your Spouse on the Autism Spectrum is Depressed 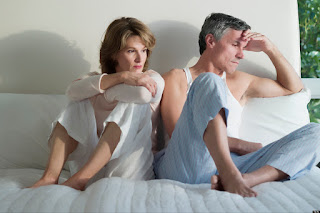 "Why is my husband [Asperger's] depressed all the time? Is depression part of the disorder? He doesn't talk much nowadays and seems to have very little quality of life in general. What can be done to help him? We haven't been getting along well for quite a while."

This is not surprising - and is a very common occurrence with people on the autism spectrum. My experience has been that these ASD individuals who are depressed a lot have been under pervasive, chronic stress over a long period of time.

Depression very rarely causes anxiety, but prolonged anxiety always causes depression. It's physically and emotionally draining to be under the influence of stress hormones 365 days-a-year ... a steady drip-drip-drip of adrenaline, noradrenalin, cortisol, Cortizone - all the stress chemicals wears-and-tears on them until it negatively affects their mood in the form of depression.

Feeling like a failure in the marriage is another major contributor to depression in males on the autism spectrum. They really want to please their wife (seriously, they do) but haven't figured out how to do this on a consistent basis. Being on the receiving end of what feels to him like chronic complaints about his "lack" slowly sucks a lot of self-esteem out of him, which reinforces his negative belief that he is indeed a social failure.

So, to work on the depression would be simply treating a symptom. It would be much better to treat the cause - which is anxiety! And the main cause of anxiety is the ASD individual's faulty belief system - and associated negative self-talk.

So in treating people with depression, I’m looking at the thinking errors they have about themselves (and the world in general), along with the destructive  inner-monologue and commentary those thinking errors generate, AND the resultant self-fulfilling prophesies that often occur (i.e., believing in something negative for so long that it eventually becomes a reality).

The cycle often looks similar to this:


On a related note, your Asperger's husband would benefit greatly from our ongoing men's group (diagnosed with ASD, or otherwise). In these groups, we take a deep dive into the issues of anxiety, depression, thinking errors, social skills, building self-esteem, and much more.