Lying or Fantasizing in Your ASD Spouse - Which Is It? 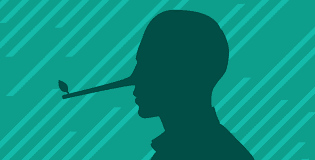 "Mark, I've watched many of your videos but haven't seen one that addresses the lying. My husband verbally manufactures whatever he thinks makes him look good in any given situation. But I'm aware 50% of it, didn't actually happen. It's compensation and excuse and falsehoods to make himself look like he took action - when it's obvious he didn't."

People with High-Functioning Autism (HFA) and Asperger’s (AS) often confuse their spouse/partner by the quantity/quality of their dishonesty and by the fact that the usual chastisement for “getting caught” dooen't change the behavior. It will be helpful for NT partners to think less in terms of “dishonesty” and more in terms of "fantasizing" (i.e., the ASD guy will say what he wants to be true, rather than what is really true).

Fantasizing that “looks like” lying happens for several reasons. Here are just a few:

1. The “partner-pleaser” factor: The HFA or AS spouse knows that the truth may make his partner angry, and he wants to please her. If he has done something wrong (e.g., due to impulsivity, compulsive behavior, self-protective behavior, language processing problems, etc.), he may try to make it right by telling his partner what he thinks she wants to hear.

2. The “lack of awareness” factor: The ASD guy simply doesn't know what is true. If he behaves impulsively, he may not have an awareness of what he has done. Also, if he has problems with language processing, he may not understand what was asked or expected.

3. The “confusing reality with fiction” factor: The ASD partner can’t distinguish between wishful thinking and reality. What is objective to the NT spouse may be subjective to him. If one truth is as good as another, he may select the one that seems (in his mind) to best fit the situation.

4. The “inability to predict cause-and-effect” factor: The HFA or AS partner can't forecast the outcomes of his behavior. To use a ridiculous example:

He throws a rock and breaks a window. His blameworthiness in the act seems clear-cut to you. However, if he has trouble with the relationship between cause-and-effect, he may not be able to make the connection between throwing a rock and breaking a window. In his mind, intentionality is a factor. In other words, if he didn't intend to do it, he didn't do it!

5. The “it’s true for me” factor: HE is telling “HIS” truth. Due to his disorder, he often experiences the world very differently as compared to you, the NT. But that does not make his experience “false.” If he persistently, frantically clings to an assertion that you feel is false (e.g., the water is too hot, this chore is too hard, talking about the relationship problems is too difficult, etc.), you should ask yourself if it might be only false to you.

6. The “anxiety” factor: The ASD man is stressed. If the NT knows that her man can't think calmly and clearly when stress levels are high, then she shouldn’t be surprised if she sees a lot of senseless, immovable dishonesty in that situation.

7. The “it’s my way to contribute to the conversation” factor: The person on the spectrum may be simply trying to join in the discussion. If he has limited life experiences or a limited emotions-vocabulary, he may want to have something to say, but no real contribution to make. Coming up with a tale (however imaginary or fabricated) may seem to him like the only way to participate.

If the HFA or AS individual has genuine “special needs” that leads him to tell “wishful half-truths” rather than the real truth, NTs should think carefully before handing out lectures and scolding for “dishonesty.” Of course, the ASD husband needs to know that he should be honest at all times, but if the dishonesty is not deliberate, chastisement teaches NOTHING!

When you catch your ASD partner being “dishonest” (in your mind), you should ask yourself if he is doing so with malice and intent. If not, you should try putting more honesty in your man’s fantasizing. Tell him what you think happened instead of demanding an explanation. If he says, "I don't know," then take that as an honest answer. Stay as composed and rational as possible when getting to the truth of the situation. Respect his reality, and be open to negotiation. Also, tell more truth than fiction yourself.

NOTE: Having said all of this, I’m NOT saying that people with ASD “never lie under any circumstances.”