In multiple studies, females have been shown to be more intuitive, which makes them more sensitive than males. Studies also reveal that females show more empathy and patience, whereas males are inclined toward problem-solving and are more comfortable with the language of logic than of emotion.

In Western culture, especially, men are taught that it isn't macho to be sensitive and show emotion. Females are given more support to express their feelings than males are.

To men on the spectrum: No matter how macho you are or how lovey-dovey your NT wife or girlfriend can get, there's always more room for sensitivity and affection. So don't be too shy to break out the emergency “nice-guy kit” every now and then, and get to work.
25 relationship tips for men with ASD [High-Functioning Autism]:

1. Be interesting rather than glued to the TV with a beer in your hand.

2. Compliment her, and tell her you love her at least once a day.

3. Connect with her physically during the day. Kiss her when you wake up, hold her hand sometimes, touch her in non-sexual ways. She'll be nicer to you, and your sex life will improve.

4. Do little day-to-day things that will make her feel taken care of, for example, fill her empty water glass, bring her coffee in bed, or turn down her side of the bed if you go to bed before she does.

5. Don't laugh at her television shows. For some women, watching Oprah or Dr. Phil may be the only “adult conversation” they have in a day.

6. In the course of disagreeing with your wife, what you may fail to realize is that, invariably, you’re wrong. You just are. You’re trying to be right — but failing. You can’t help it. It’s the nature of things. Husbands are bigger, hairier, stronger, and wronger. It’s just a fact that you should just get used to (your wife has!). Also, when you're angry or upset, tell her why. Don't make her guess.

7. Encourage her dreams and help make them come true if you can.

8. Give flowers for NO reason. Daisies picked from a neighboring field will put a smile on her face.

9. Have your own opinions. Females like males who are clear on what they think – and why they think it. Males, though, enjoy ever waffling. Well, waffles are for children. Stop it. Commit to thoughts, ideas, and decisions. Sure, you will be wrong about whatever it is you decide to think – but you’ll be attractively wrong (i.e., wrong, but manly).

10. Help around the house. These days, both partners are usually holding down an outside job. The home chores must be shared. Do so willingly.
==> Living With Aspergers: Help for Couples

11. If your girlfriend comes in during halftime of the super bowl and says something like, “I’ve been thinking about our future together,” then you should turn down the volume on the TV and listen (really!). If anything involves you at a fairly high level and “the two of you” in the long-term, then STOP whatever you're doing and pay attention to the given matter. If you don't, you might unknowingly agree to move out to the country, get a couple goats and a horse, raise 3 kids, and start attending church. Then you'll be in for a long discussion, all because you were too busy watching the Colts lose another championship.

12. If your wife or girlfriend is happy so long as you listen (or pretend to) when she talks, then leave it at that. But if you see that she wants you to be interested and ask many questions, then doing so might save you a lot of future headaches.

13. It would be in your best interest to remember that women have very LONG memories and don't forget easily.

14. Know that if she is a "stay at home" mom, she is doing a huge job and one you would not want. Show appreciation.

15. Learning to be sensitive is something that improves with age. Some males are naturals, while others lack the suave, subtle ways needed to keep their woman happy. In any event, adapt your game plan based on how much affection your wife or girlfriend wants (or needs).
==> Online Group Therapy for Couples and Individuals Affected by Autism Spectrum Disorder

16. Let the kids be your responsibility now and then. That way, she'll get some time for herself for a change.

17. Listen, listen, then listen some more! Put down that newspaper (or TV remote) and let her know your focus is on her. When she tells you her problems, try not to jump in with advice. A sympathetic ear may be all she needs.

19. Plan special evenings for no reason, AND schedule the babysitter.

20. PMS -- don't make light of it, they hate it as much as you hate the moods and outbursts.

21. Remember that your tone does too matter. You know how in arguments with your spouse, you keep 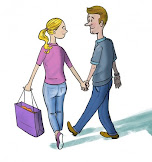 thinking that if she would just focus on “what” you are saying instead of on “how” you are saying it, then she would see how right you are? Yeah, well that is never going to happen. She needs to know you still love her as you are yelling at her. Women are weird like that.
==> Living With Aspergers: Help for Couples

22. Stop fidgeting while your spouse is talking to you. It really is rude — and you know it. If you don’t stop doing that, then one day, when your spouse starts talking to you about her day, you’re going to start fiddling with the remote control or something else, and she’s going to suddenly scream and throw a cast iron pot your way.

23. Suggest a walking routine together, not to discuss heavy issues, but to simply spend some time together.

24. Take care of all vehicles. Some men feel if it's the wife's car, then she needs to schedule maintenance on it.

25. When buying gifts, make them special – no appliances unless she is asking for them.

•    Anonymous …Anyone have problems with their parents? My mother hates me and says I'm uncaring, unloving, and selfish and she doesn't want to see how I raise my children because they will be the same way. She also thinks I'm setting her up for failure when I ask her a question and then give her the correct scientific answer. When in my reality, all I'm doing is trying to update her info, so I think I'm helping her to gain better knowledge. The thing is, if I didn't say these things, we'd have nothing to talk about :/ It's sad really. I'm afraid our relationship is going to be over. She does not like the "real me." She prefers the quiet insecure teenager that I used to be years ago. According to her I've "gotten worse" but I'm really just discovering myself. Sorry for the rant, it's been an emotionally draining night and day. Has anyone experienced this?

•    Anonymous …Sounds like the problem is with your mom ...I wouldn't view this as your issue. It's hers. Does she understand Aspergers (High-Functioning Autism) at all?!

•    Anonymous …Only when it's convenient for her it seems. But she also thinks she may have passed it down to me. We will never know, she's not willing to get tested.

•    Anonymous …Sounds a lot like my mother. I ended up "timing" my visits to 15 mins unless things were going exceptionally well. I had a "pre-planned excuse" to leave if I didn't like the way conversations were heading. And, that 15 mins was exhausting! My mom had her own "issues" and sounds like your mom does too. Don't let her "issues" upset YOUR life. I found the key to surviving the relationship with her was to set some very strong boundaries.

•    Anonymous …I dont know if this will help... Im trying to suggest that you can remain hopeful about the future... I was estranged from my parents until a boyfriend both limited the length of each visit, but increased the number of visits. (like Lynn said). But really, It was strained until I had kids; bizarrely i then re-evaluated everything my parents had done/said, and through new understanding I forgave most of what had occurred. Parenthood is hard and many parents lack info and support to become better at parenting. Maybe it's also that you don't understand your mums fears and feelings (?) and that she's still trying to say how she feelsas a mum 'in general', rather than trying to be hurtful to you? Regardless- It sounds like you're in pain. Hang in there, and remember to treat yourself well."

•    Anonymous …"OMG! Someone recorded one of my many conversations with my mother! LMAO!! This is priceless! I too spent many years as an independent contractor and got the "why don't you get a real job" speech. My mother quit visiting me and I only saw her on holidays at her house after she came to my house many years ago when I was out working and CLEANED it! I asked her to never do that again and so she never came over again - which was actually totally fine with me! LOL"

•    Unknown…My son is going to be 21 years old and is going to be elaluated for Aspergers. He say it is too late for him at this age and his future is "F***ed". Any words of inspiration or later in life diagnosed people out there that have success stories? Thank you! Heartbroken.