Why I Am Glad I Got Diagnosed 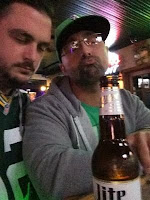 Hey guys, my name is Matt and I have been diagnosed with AS. When I first started dating my current girlfriend, she suggested that I may have AS. She had pointed to certain behaviors of mine that drove her crazy, and said she would like me to get a professional opinion and, ideally, some help.

I wondered, "Could she be right?" So I got online and did a bit of my own research. Almost immediately, I had the thought, "Hmm, I think I could have it – I've got a lot of those damn traits." So I set up an appointment for an assessment, and sure enough, I met enough of the criteria to receive the diagnosis.

Getting a diagnosis removed the mystery and diminished the shame I carried around for being "a bit weird.” I have begun the process of learning to live more adaptively with an AS brain. I have felt "different" my whole life. Now, I'm hoping to find a community of individuals who get who I am, how I think, and even how I feel. A diagnosis of AS has given me the push I needed to get in touch with support groups and connect with that community.

I've been called "obsessive," but I felt I was just very interested in one incredibly remarkable subject -- automation engineering. I wanted to figure out whether I was right or wrong, and make a good decision about whether to try to expand my interests.

Now that I know I have AS, I don't feel the need to have a wide range of interests just to please other people. I've learned that people with AS typically only have one or two special interests. So, now I understand why I put so much attention on automation engineering.

I figure that if I didn't get the "AS" label, then I would be leaving it to everyone in the community to give me the label of their choice (e.g., odd, self-absorbed, rude, and so on). A diagnosis helps others in my life to understand me and respond differently to my “odd” behavior. It also has provided a framework for labeling, understanding and learning about behavioral and emotional challenges that have been baffling to me up to this point.

It’s never too late to increase self-awareness in order to capitalize on strengths and work around areas of challenge. Knowing about AS gives me an explanation, not an excuse, for why my life has taken the twists and turns that it has.

The bottom line for me is that I am tired of suffering the consequences of being constantly misunderstood. When the people close to me are able to understand that there is a reason for my quirks and difficulties, it's much easier for them to empathize with my situation.

I've pretty much done a life review. I've disclosed to a few family members, friends and co-workers that I have the disorder. Now I understand why certain careers and relationships have - and have not - been successful for me in the past. And I have tried to repair a few relationships that have been negatively affected by my disorder.

If you have AS and don’t know, it affects you anyway. But, if you do know, you can minimize the negative impact and leverage the positive. That's my current mission.

What I’ve Learned About Me: Self-Confessions of an Aspie

I’ve often been accused of being “unsociable.” I don’t mean in the sense that I’m “criminal-minded” or out to get people or do them harm. I mean I tend to feel awkward in social situations, and as a result, I try to avoid some interpersonal encounters.

I’ve discovered that my tendency to be unsociable is a form of extreme self-focus – a preoccupation with my thoughts, feelings and physical reactions. When I talk about being unsociable, I’m referring to three traits that involve a sense of self: self-consciousness, self-preoccupation, and self-evaluation.

I do indeed have difficulty meeting people, initiating and maintaining conversations, deepening intimacy, interacting in small groups and in authority situations, and with asserting myself. I don't take advantage of social situations, never go out on a date, am less expressive verbally and non-verbally, and have little interest in other people. If this makes me unsociable, then so be it.

Part of me truly wants to be more outgoing and approachable, but I’m slow to warm up in social situations. I may go to an event and stay 10 minutes, then leave. I know this is a mistake because I haven’t given myself enough time to “warm up.” If a party starts at 7 p.m., I’ll go at 8 p.m. But showing up late actually works to my disadvantage. I should show up early (maybe at 6:30 p.m.), get used to the surroundings and greet people one-on-one as they arrive, so that by 7 p.m., I’m comfortable.

I have what I call a “small comfort zone.” I have friends and a social network – but it’s a very small circle. I tend to do the same things with the same people again and again, because I feel at ease in a situation I know. I don’t like to try new situations, and I purposely restrict my contacts. I may be at a social function and see someone new I’d like to talk to, but I won’t step-out of my comfort zone.

One of the negative consequences of being this way is that I’m under-employed – stuck in a job that requires less skill than I truly have. I’ve tried to force myself to be more sociable, but I come off as so awkward that it usually backfires in some way. For example, if I’m at a party or event, I think all I have to do is initiate a conversation. But that’s just the first step. I have trouble taking the next steps (i.e., actively listening to the other person, responding to his or her comments, connecting their experience to mine, and so on).

People tend to think of my lack of sociability as a negative trait, but that’s because they don’t understand it. I talk about becoming “successfully unsociable.” It involves realizing that there’s nothing wrong with me. Most people don’t care about me, they care about themselves. It’s very liberating to realize this.

The fact that I’m not very outgoing doesn’t mean my personal achievements are limited. I’m good at what I do and do have a few close relationships. Staying mostly to oneself is not a disorder. I’m ok with me. If I come across as uncaring, selfish, or cold, it’s not my intent. I’m simply reducing my anxiety level. And as I mentioned, part of me does want to be more outgoing, and I’ll continue to work on that. But, in the meantime, I’ll do what I have to do to take care of me.  ~  Anthony