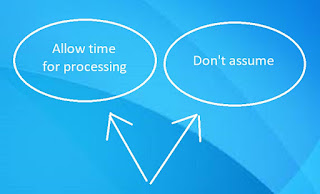 • Wow… this scenario is sooo familiar.We're an Aspie husband/NT wife couple who spent the first 35 years of our marriage without realising what we were dealing with (and not very well).Then came the diagnosis — for me and our five adult children and most of our grandchildren — and a whole new relationship.Next month is the 50th anniversary of our wedding in 1968.Thanks for this insight. :D

• How is it that your Asp diagnosis was not found until you were in your 50s.

• Autism wasn't on the DSM until 1980, Aspergers was added later (and has now been rolled into autism spectrum disorder in the latest edition). Since diagnosis traditionally focuses on childhood development, adults are overlooked unless they are looking into other health issues.

• We went to many marriage counselors in the 80s. None of them could figure him out. Finally at age 60 he agreed to be diagnosed,(he's on severe side) he stormed out of room. Won't admit or talk about it. Five years later,42 yrs marriage,it helps me understand him. He seems to be getting worse with age.But I am unbearably lonely.😢

• I'm 55 now and was only diagnosed 3 years ago. When my wife met my Uncle about 21 years ago she commented that he must be on the spectrum. My wife had been working as an early intervention therapist. It was only 18 years later that she suspected that I could be as well.

• How is it possible for your diagnosis not to be picked up for so long. Do you have the mildest form of Asperger's?

• I have just been diagnosed at 44, always felt so different and struggled.

Now I just except I am wired slightly differently and no longer try to have friends etc because that's what everyone expects which I hate!

• Helped with wife and kids who know understand me better and realize that my routines are important to me and to give me a little time and space.

• Just wish I had found out many years ago as I feel so much better and can move on in life.

• I realise my 53 year old husband has AS . It's so difficult, hard to cope and feel so alone

• Asperger's Syndrome was not officially recognised until the DSM-4 was released in 1994. So it was really easy NOT to be diagnosed until I was 57 yo. And yes, I'm mildly affected — although I have a few aspects that are more pronounced.

• Common to not be diagnosed until adulthood. I know one man who was a senior. I was 30.

• I am also married (2nd time) with an aspie. My 1st marriage, my husband was NT( as myself) and adjusting to an aspie husband is still a work in progress. I lived thru the same things the article mentions but i learned something else. Surprises when it comes to birthdays or trips do not sit well either. I loved to give surprised trip for a bday but with my husband and not child, i have to let them know that i am planning something for them. Yes, the surprise effect is gone but they both need to adapt to the new adventure. everyday is a work in progress adapting to them :)

• Can anyone here relate to the husband with asperger not being ok making love even though we are married and had an active love life before marriage? We stopped being active till marriage for a year and a half so honey moon night came and NOTHIN! And maybe 7x since then and we're going on 5 years together/4 married!

• That seems to ber very normal with Aspergers sadly. I’ve been married for 15 years, together for 19 and it’s been one a year and I doubt it will ever happen again. It was great until we moved in together.

• Yep.still can't work out why it was different then.

• The groceries! Every week! Thanks for the reminder. I forget to ask and I’m really bad about not asking for what I need. I have learned to ask for a “minute” when I’m sad/lonely and that is his cue that I need a hug.

Help for the Depressed Aspie