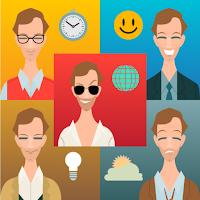 If you are a neurotypical (NT) woman considering getting into a relationship with a man known to have Asperger’s (high-functioning autism), you may want to be aware of the following types:

1. Routines Are Paramount— This individual finds great comfort in routine and will be very disappointed if his partner tries to surprise him or change him in anyway. His day-to-day schedule always looks the same – eats the same food, goes to bed at the same time, has the same (few) friends, etc.

If you try to spice things up a bit, you may find that he gets very anxious and angry. He HATES change of any kind, which often makes for a very boring life for his partner. This guy is prone to rage and meltdowns.

2. Other People Can Pick Up the Slack— This man is initially fun and alive - and oh so sweet. He carries his share of the load in the relationship (e.g., with chores, paying bills, raising the kids, etc.). But, after a few years, he regresses into lazy teenager, glued to the computer and leaving you to pick up the slack. This usually causes his partner to become very frustrated and bitter. She also goes through the years feeling very alone.

Unfortunately, when she confronts him, he puts a negative spin on her complaints and attempts to make her look like the “bad guy.” His refusal to look at his contribution to the relations problems often brings out the worst in the woman (she can’t fix the problem, and efforts to fix it makes it worse).

3. Logic Over Emotion— This individual never talks about his inner feelings. Instead, he’s overly logical. He’s very biased to his values and belief system – and finds it extremely difficult to empathize and to understand other’s point of view. He may appear highly self-centered and is always absorbed in his own activities, thoughts and challenges, which often makes his woman feel neglected and unloved.

4. Hot, Then Cold— Unfortunately, this guy gives no clues up front that his commitment-level will wane over time. In the early stages of the relationship, you may find that he is literally obsessed with you – texting you all the time, saying all the right things, wanting to spend A LOT of time with you, etc. However, after a few months (or years), he loses interest and instead focuses on work or one of his other (new) obsessions. In addition, his sex drive may diminish drastically.

His early passion for you was indeed genuine, but once the newness of the relationship wears off, he feels the need to find a new passion rather than keeping the former passion alive and pumping.

5. Goals 1st and Relationships 2nd— This individual may come across as utterly heartless. He is mainly goal-oriented and has zero tolerance for mistakes. Break his trust once, and you may pay the price for several weeks – if not months. He will likely be the type of partner that is very stubborn and immovable about many matters (e.g., you suggest that the two of you go on a 4-day cruise, and he says, “No way in hell!”).

Don’t try to argue with this guy, because he is NEVER wrong. On the upside, he is usually very successful, financially independent, and educated (e.g., an engineer or accountant).

It likely that many men with ASD have varying degrees of all (or most) of the traits listed above, but tend to exhibit one or two types predominately.

Now that we’ve looked at these 5 types of ASD men, NT partners need to understand that relationships don’t really thrive on love. Rather, they thrive on acceptance, compassion and understanding.

Some woman can find it in the heart to accept the things they can’t change and to stay in a relationship that didn’t turn out the way they thought it would. Others may feel the need to move on and build a relationship that’s more in line with their expectations. Either way is acceptable – and nobody has the right to judge!
(Note: There would be a third option, and a very sad one indeed. And that would be for the NT woman to simply tough it out, never accepting things for what they are, and living a life that she may deem "miserable" and unsatisfying.)

Here are 6 hacks to help reduce your stress throughout the work week:

1. Do something physical after work. Instead of walking in the door and crashing on the coach, give your body some attention in the form of exercise, or simply spend some time with friends or family. If you just work, then crash, then work again, then crash again, you are over-valuing your job – which will cause you to get lost in your own stressful thoughts and daily pressures. Instead, replace the work anxiety memories with new, better memories through good social contacts and exercise (note: combine the two by going to the gym with a friend).

2. Drink less coffee: If you start your day with a habitual cup of coffee – and then drink more once you get to work – know that this will raise your anxiety level. While a couple cups of coffee will increase energy level, it will also mimic stress symptoms (e.g., shakiness, racing heart, upset stomach, etc.).

3. Get up and move around. Go to the bathroom and stretch. Get a drink at the water fountain. Take a short walk on your lunch break. Anything to avoid sitting in one spot for too long. When we sit for lengthy periods of time, our breathing becomes shallow, which raises stress-levels.

4. Learn to turn your tasks into challenges for yourself. A lot of jobs consist of boring, menial labor. But you can add some spice to your life by timing yourself to see how quickly you can complete a particular task - or see how many tasks you can complete in a set time. In other words, turn your work into a game. This will give you the opportunity to accomplish more – and make your job a bit more pleasant.

5. Stop over-analyzing your anxiety. Oftentimes, diagnosing what exactly is getting you stressed creates even more stress. A moderate amount of stress is normal and to be expected. Some jobs are naturally stressful. Thus, paying extra attention to your stress-level is not unhelpful.

6. Take frequent mental breaks. Even if it’s just for a minute, meditate, take deep breaths, drop your shoulders and release any tension, or visualize a peaceful place that you experienced at some point (e.g., the beach). These little tactics help your brain to wind down a bit, which in turn reduces anxiety.