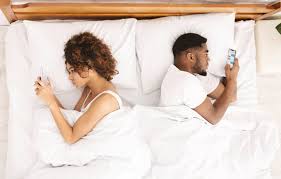 Neither one of you had the thought of this intimacy and appreciation business, but that's what was going on. She got her intimacy in the early days when you first got together. You got your appreciation.

He's not purposely trying to do this, but he's disengaging from the intimacy that was established in the beginning; he separates somewhat, and she notices that - and she starts becoming the “pursuer.” But, the more she pursues, the more he distances himself, because her effort to get him to reconnect [even though her intentions are pure] downloads in his mind as criticism [e.g., I’m not good enough. I’m not measuring up. I’m not meeting her expectations.].

The more that she pushes to get him back into the relationship, the more that causes anxiety for him, and he continues to distance and distance - and she continues to pursue and pursue. Finally, she gets tired of pursuing - and may become resentful for “wasting” so many years.

So, she's no longer getting her intimacy needs met, and you certainly are not getting your appreciation needs met. But the marriage difficulties affect her more profoundly, because one of her main passions is social and emotional things. So, when you disconnected, she lost one of her main interests. You didn't lose much though! You still have your main interest, whether that's a hobby, your work, or whatever.

When this disengagement occurred, she lost more than you did, and so that's why she is the one that's more distraught - and therefore the one that's more resentful …the one that's angrier and more verbal about the “disconnect” than you. You were more connected with her back in the day, but that has disappeared.

She might say something like, “When we first started dating, things were pretty good. He was sweet and nice and affectionate, but he changed. He changed, and it's not like it used to be anymore.”  In a nutshell, she needs you to give her more of a sense that she's getting some of her intimacy needs met - and in return, you will get more of your appreciation needs met. There are many ways to get intimacy needs met, and one of the main ways is through effective communication.

When she has broached some difficult topics, what typically happens? Your anxiety comes up, of course, because now she's talking about a heavy topic, and you may tend to either meltdown or shutdown, or just stand there and act as if you’re listening and agree with her [e.g., “Yeah, sure, okay, I’ll do it. Whatever you say.”] – just to hurry up and get the conversation over with.

The ASD man’s typical reaction [when his NT wife is trying to talk about some heavy topics about relationship problems] is to either do some version of a shutdown or some version of a meltdown. This is what we want to get rid of guys! We want to stop the propensity to react with meltdowns and shutdowns [i.e., a response that has been either aggressive or passive]. We want to avoid those two ends of the extreme, and what would be in the middle is “assertiveness.”

Passivity could be: “I’m afraid that I’m going to say or do something wrong. So, I try to say and do as little as possible - anything to keep the peace” [an example of when he just avoids the conversations entirely]. Aggressiveness could be: “She has made me very anxious when she talks about these relationship problems, and my anxiety sometimes expresses itself as anger and rage.” So, we're trying to avoid those two extremes and come into the middle, which is assertiveness.

One version of assertiveness would be to face the music when she wants to talk about heavy topics - and to sit there and practice dealing with uncomfortable emotions in the moment. For example: As she is talking, I'm going to look in her direction. I’m going to nod while she's talking. I’m not defending myself, and I’m not leaving. I’m staying right there and facing the issue in question.

Her message may not necessarily be the way that I see things, but I’m not here to defend my perspective or to offer my opinion. I’m here to listen to her opinion. So, the goal here guys is listen to understand rather than listen to “mount a defense” - and that sounds like a tall order, and some of you guys will be thinking, “I don't know how the hell I’m going to tolerate that.”

I’m sure you've been in the “dog house” so much that you've taken up residence in there, because it's safer to be in in the doghouse than to face the music and have her talking to you about difficult problems. So, let me remind us of what we're doing here. My goal is to help you reduce your relationship stress, and one of the ways that I can approach that goal is to help you guys avoid taking either the passive reaction or the aggressive reaction to her difficult conversations.

How do we do that? We get to assertiveness rather than being passive or aggressive. What does that look like? We stay right there when she's talking, rather than talking over her or getting angry with her - or leaving. You say, “I’m here to understand your point of view, rather than listen to defend myself.”

So in this scenario, there's no defense …you're not going to feed your pride or ego. If you make the mistake of trying to squeeze-in your defense or try to prove her wrong – you've just SCREWED yourself out of a golden opportunity to give her some display of empathy.